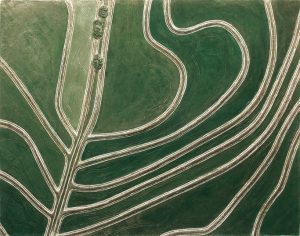 On numerous flights from Houston to Lafayette LA for a commission, I became intrigued with the particular look of that region of land from the air. I found myself studying this patchwork stretch of land on Google Earth. I discovered stunning little compositions of wonderful color, form and texture. These sections, when framed out from the surrounding areas, were very abstract, often suggesting an entirely different reading of what they represent. That was part of their appeal for me. Although each is a fairly accurate portrait of a real piece of the earth, they offer alternative ways of seeing. Some suggest to me other artists such as Milton Avery’s poetic landscapes; for example; “Layers of Meaning” or “Promising Beginnings”. There is the fractal patterning in nature that suggests multiple readings such as “Leaf or Land” and “Fields and Islands”.

These fields, forests and bodies of water are configured by property lines, the lay of the land and by the most efficient use of that land for agriculture with no consideration for their aesthetic appeal from above. I am pleased to introduce the viewer to a select few of these inadvertent wonders!

They are made in clay and cast in Forton MG. This product is part cement and plaster and mixed with a glue like liquid which makes it very strong. It is also reinforced with fiberglass. The reliefs are light weight. Dry pigments are added to the mix of each section of a different color. Some glazing and color is added to the casting afterwards. 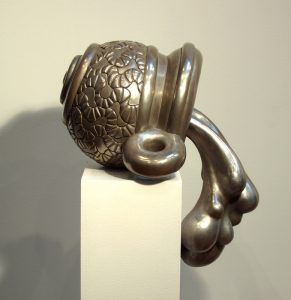 After the loss off both parents in two weeks, a bout with pneumonia and reading too many science books that reinforce one’s sense of geologic time, I was feeling the puniness of being human!

I was also thinking of my love of vessels with their static but stately presence. I decided on tipping the vessel over so it becomes animate, releasing an imaginary juice from within. Each vessel expresses some emotion, some expression of energy through the release of the liquid within. The handles are like partial token limbs, sometimes reflecting the expression of the vessel. A target shaped design defines the bottom of each vessel. It is a symbol of it’s demise. There is only so much juice in each vessel before reaching the bottom. But the target is on the backside and it is the mouth that expresses life, creativity and vitality.

Though a little comic and pitiable, I gave them visual appeal. They are cast in bronze and have a silver nitrate patina.

After many public commissions, which generally call for a degree of formality and earnestness, I needed to do something more playful and intimate. The purses were the result. Standing in for the female presence, they have a decorative exterior and open up to a plain interior. While obsessing over the form of the purses I thought of how women obsess about their figures and how best to present themselves to the world. It is one of the oldest ways in which the female could express herself. While many other options are now available, the presentation of self has remained basic. The decorative exterior of the purse suggests a public presentation of self, the interior offers a private reality.

The purse has other associations such as “the power of the purse” suggesting control or the power of inheritance. It is an object of vanity displaying one’s creative judgement and it contains objects of considerable importance to the person holding the handle.

The inspiration and influences for the purses were varied. “Prickly Purse” was a mix of rubber pronged industrial mats and African fetish figures. The breast like forms of the purse are protected against touch by the prickles. “Seedy Purse” owes something to Japanese teapots while “Spiral Purse” was inspired by a very old Chinese vessel with spirals. Spirals are an ancient symbol found throughout the world often representing the cycle of life and rebirth. “Purse of Plenty” offers an alternative to a the masculine horn of plenty. “Holy Purse” was inspired by walking into a sheet metal shop and viewing all the varieties of perforated steel sheeting. I was intrigued by the way the light came through so that there is sort of a twinkling as the eye moves around the object.

The steel purses look archeological but represent a contemporary object forcing the viewer to think of human creativity as something fluid in terms of time.